Hope everyone had a great weekend! It’s hard getting back into the swing of these after a long weekend, but the weekday routine is always nice. Although we didn’t do anything too exciting, today I thought I’d share what we were up to over the holiday break!

Tyler’s unit was on leave last week and will still be on leave this week, but he didn’t take any vacation days. We wanted to go to Vegas, but I’m in school all summer and our schedules didn’t coincide with one another. His work days were shorter last week though, so that was nice. On Wednesday evening we hung out and Redboxed the movie “Identity Thief” which had some funny parts, but was just okay.

When we woke up Thursday, we both agreed that it would be a lazy day. I know it was the 4th, but doing anything outside in the heat did NOT sound appealing to us at all,  and because it was overcast here (it’s sunny 90% of the time) it made being bums sound that much better! We spent the day watching movies and TV, playing with the dogs, and picked up Corner Bakery for dinner. Who cooks on super lazy days? Not I! 🙂

I woke up at 6AM Friday and hit the gym for a quick run and arm exercises on the weight machines. Some people hate weight machines and may even think they don’t do anything, but I love them! After the gym, I came home to shower, grab my overnight oats for breakfast on the road (yes, I eat and drive…only breakfast though!), and made the trek to Sprouts which is on the other side of El Paso. Unfortunately, we do not have a Trader Joe’s or Whole Foods here, so I make a trip to Sprouts once a month or so. I love their produce and Boar’s Head premium deli meats and cheese, and that was what sent me there on Friday, but I usually just go there to scope out new products they have that I want to try.

This photo is from my trip in June, but got this all for less than $30!

After Sprouts, I drove to UTEP to drop off my final paper for a History class. Seriously handed it in and left, but had to walk like a fricking mile from my car to the building and back. Annoying, but at least it’s one more class down! It’s the second summer class I’ve finished so far this summer- I took a 2 week long Political Science class after Spring semester in May. I came home after that, we did some chores around the house, and I finished up homework for another class I’m currently in (this one is all online though). Dinner was lobster and crab mac n’ cheese for Tyler (we found this at Costco, but I’m not a fan of lobster), and sauteed zucchini, yellow squash, mushrooms, and red peppers atop spaghetti squash with diced tomatoes (I didn’t want to open up an entire can of sauce just for me) and plain Greek yogurt. Oh, and some sliced chicken sausage! Super good.

Saturday morning I decided to forgo the gym and slept an extra 45 minutes. I used to go every morning M-F (and usually still do), but for the past few weeks I have skipped a weekday workout and replaced it by exercising on Saturday or Sunday. The gym I go to is two minutes away from my house, and while it doesn’t offer any group classes which I’m interested in trying, I can’t beat how close it is! I showered and made breakfast for myself (open faced pepper jack, turkey, and spinach sandwich with 1 egg white and 1 whole sunny-side up egg), and went to my hair appointment to get my color touched up and a trim. I hit up Super Target after that to pick up some groceries for the week. Has anyone tried the new Kashi Chocolate Almond and Sea Salt with Chia bars? I had a coupon so I bought a box- delicious if you need to satisfy a sweet craving! Tyler went to get a haircut himself and did some stuff around the house. Around 5 o’clock, we went to the home of a guy Tyler works with and had a cookout with him, his wife, and their adorable 2 year old daughter. Dinner was comprised of brats, Italian sausage, pasta, and vegetable salad, and we hung out on their patio until it was dark. The guys bought the UFC Fight to watch, and we got home around 10:30. This was the latest we’ve been out in a long time, haha.

Sunday Tyler and I went for brunch at a local restaurant called Crave. We had been here a handful of times before for lunch or dinner, but never for breakfast. I went with the egg white and veggie scramble and it came on a huge flour tortilla (tortilla for breakfast is weird for me, so I only had a few bites of it with my eggs) and the green chile biscuit and gravy as my side. I didn’t have a sweet tooth this morning, and since moving here I’ve discovered that I love green chiles I opted to try something somewhat adventurous. Biscuits and Gravy is hit or miss though-sometimes it’s nasty and sometimes it’s awesome. This one was so-so, but I don’t think I’d order it again. Tyler got a huge breakfast burrito filled with grilled steak, potatoes, eggs, cheese, and onions and the whole wheat pancakes as his side. The pancakes were amazing, and we both agreed we’ll get a large stack of those next time we go back! We rarely go out for breakfast, so this was a treat. I suck and forgot to take any pictures. Sorry! After breakfast, we stopped by Chipotle to grab ourselves dinner for the evening. We initially wanted this on the Fourth for dinner, but they were closed. Boo. We’ve eaten out 3 times the past week (although they were all relatively cheap!), but this never happens- I swear! I like cooking dinner, but sometimes it’s nice to order healthy options elsewhere. I got ahead on some school readings for this week while Tyler played Xbox, and then I went to the gym around 2:00 for an hour. The rest of the day was spent relaxing, and of course, watching the new Dexter in the evening! 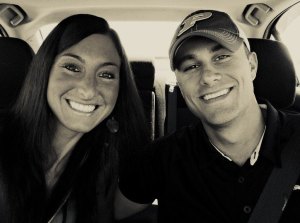 I realize how boring this post is with no pictures, so here’s one from the weekend before weekend of us! 🙂

I start a new class this week, and I’m actually pretty pumped about it! It’s a Women Studies special topics class entitled “Food and Culture”. I’m also currently in a Pop Culture: Gender, Race, and Class in Media course. Though homework is typically never fun, I think I’ll actually enjoy the rest of my summer learning about this stuff!

How was your weekend? Did you do anything fun or did you hang more low-key like ourselves?

What meal you go out (or order to-go) breakfast, lunch, or dinner?